I admit it: I’ve cheated. I’ve recently read Carlo Vanoni‘s book In Bed with Mona Lisa – Contemporary Art for Commuters and Curious Minds (La Toletta, 2014) all at once, while on a train from Brussels to London. Which is a shame, because the nice idea about this humorous trip into the world of contemporary art written with Luca Berta is precisely the contrary: its ten micro-chapters have been written to be enjoyed while commuting back and forth to work, in the space of a week.

Being a commuter and an art lover myself, I simply could not resist this formula, which I find particularly fitting. Vanoni’s gamble paid off and he managed to write a very accessible book addressing some of contemporary art’s recurring issues, such as the fact that, as he writes, people not used to conceptual painting are likely to say things like “In my opinion this has nothing to do with art!” or “In my opinion my son could do better!” (on the latter, see my previous post on Miró’s exhibition). 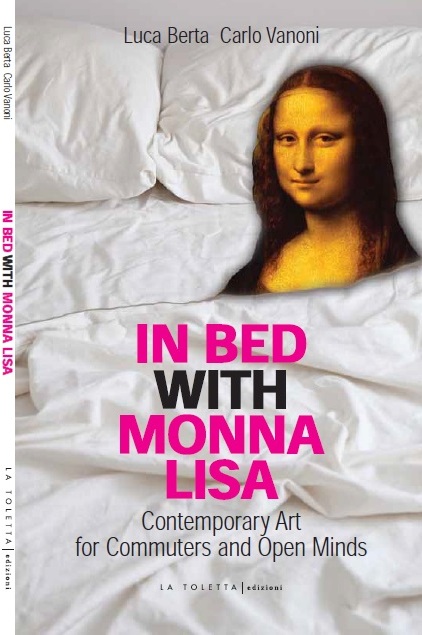 For those of you who are not familiar with Italian television, and art telesales in particular, here is what you should know about the author. A passionate guitar player and regular contributor to Italian art magazines such as ArteIn (you can find some of his pieces translated into English here), Vanoni graduated in Sociology and studied Preservation of Cultural Heritage at Ca’ Foscari University in Venice.

Being a professional art consultant and a collector at the same time, Vanoni has lately pushed the boundaries of his emotional approach to the world of art. It all started with a new method of selling art on Italian TV, which led him to become one of the most known presenters of Orler Art Galleries in the space of a few years. But his way of selling has always been quite eclectic (here is one of the openings for his weekly appointments).

The popularity he has earned through television has indeed much more to do with divulging the history of contemporary art, rather than simply selling it. An activity he combines with cycles of conferences on art and finance, more focused the economic side of this world. Some of his transmissions, such as “In a Silent Way”, are closer to poetic interludes linking music to art pieces; others are intimately titled “A Tea with Carlo”. Now, with the travelling show L’arte è una caramella (Art is a candy: watch the trailer here, although it is in Italian you get the feeling), he has gone a step further, and has become an all-round performer. As his fans say of him, “he is not the usual TV salesman”.