My main problem with TV series is time and schedule. Watching one series after the other of my favourite TV show is clearly exciting (and time consuming), but having to synchronise my desire to watch the latest episode with airing dates has always been an issue for me. Mostly because I don’t watch TV the way I used to years ago.

I still remember how much I enjoyed The X-Files as a kid. It was my Sunday evening rite (tied in with the Italian time broadcast slot), and I used to meet Mulder and Scully while eating pizza and drinking a Coke. But after the two scheduled episodes had ended, I immediately got pissed off because I wanted to watch more. But I couldn’t. It didn’t matter how strongly “I wanted to believe”: I had to wait until the next week.

Now I don’t wait anymore. I want everything to be available immediately: all the seasons, as many episodes as I want. This is why I tend to wait for a series to end to then start exploring it at my pace. And this is also why, after getting a taste of it in 2012, I’m really enjoying the time I’m now spending with Sons of Anarchy. The cable network FX recently aired the final season about the eponymous outlaw motorcycle club created by Kurt Sutter (whose life is even more interesting than the show itself) and I’ve started to watch it from the beginning. I’m currently spending most of my evenings with SAMCRO: I decide how many episodes I want to see, when, and on which device. In this state of grace provided by full accessibility of content, Jax & the Club have easily become my new “media friends”.

Isn’t it the paradise of the fan? No, actually it is not. The problem is simple: the more you wait, the more spoilers you get. Although I consider myself quite good at avoiding them, it’s becoming way more difficult for popular TV series. My Facebook timeline and Twitter feed, for example, are flooded with news about Game of Thrones and The Walking Dead, two series that I enjoyed until Season 2 and then paused because I had to catch up on tons of films. Now, surfing between news while avoiding major spoilers has almost become an art form. Also, I am out of synch: it seems that everyone in the world except me is talking about the last episode of this and that, while I’m not joining the conversation (and sharing is a major pleasure for a fan). 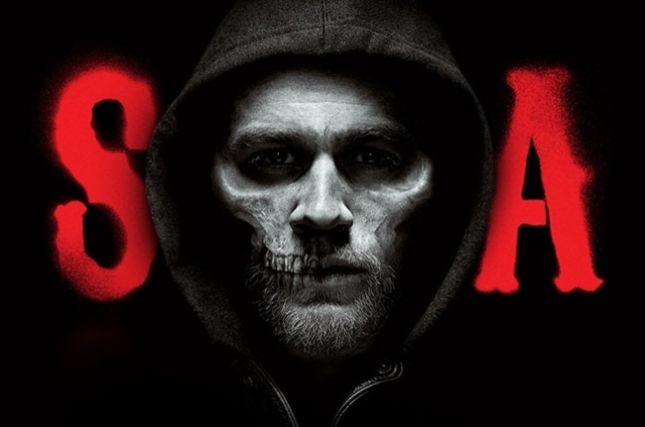 By the way, now that I’m in the middle of Sons of Anarchy’s second Season, here are my awards for Season 1 of this version of Dynasty filled with guns, drugs, badass bikers and chicks. Goriest scene: SAMCRO erasing former member Kyle’s tattoo with a blowtorch (1×05, “Giving Back”). Cutest interlude: Jax cuddling his new-born baby Abel for the first time (1×08, “The Pull”). WTF? moment: jailed Otto smashing agent Stahl’s face on the table in Stockton (1×10, “Better Half”).

But has the series really ended? As we all know, nothing is really over when it comes to contemporary media. Cancelled TV shows can be reactivated, at least for a while, under the pressure of fandom (see The Veronica Mars Movie Project) or creative and economic impulses, as in the case of the cult 24, Twin Peaks and The X-Files. So, sooner or later, I’m expecting SAMCRO to be riding again in the streets of Charming.