Is there anything more intimate than your young son asking you to tuck him in? It looks like the perfect portrait of a happy family, so I suppose it was about time for a fan of horror film to twist this idyllic cliché and conceive one of the creepiest short films that I’ve seen in a while.

Playing with the uncanny rather than the gore and violence, Spanish director Ignacio F. Rodó conceived Tuck Me In in 2014 and won last year’s Filminute award for best film. This “micro-horror” barely reaches one minute in length and is based on a story by Juan J. Ruiz. It is set at bedtime and features Mark Schardan, who plays the role of a father who is requested to perform what every son (in this case Alex, portrayed by Luka Schardan) usually asks for: to check if some dreadful creature is lurking under his bed. 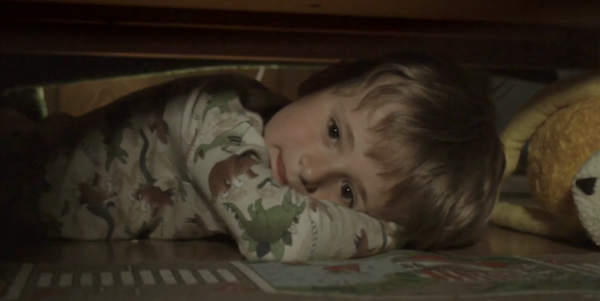 You can discover for yourself what happens next by watching the short here. If we have to believe how the project began, everything started one year ago, when users on the AskReddit forum started to answer the question “What is the best horror story you can come up with in two sentences.” Ruiz’ entry, posted under the nickname justAnotherMuffledVo, proved to be the most popular: “I begin tucking him into bed and he tells me, ‘Daddy check for monsters under my bed.’ I look underneath for his amusement and see him, another him, under the bed, staring back at me quivering and whispering, ‘Daddy there’s somebody on my bed.’”

What happened next can be credited to Rodó and his crew’s talent, as well as the viewer’s imagination that screens the rest of the story in their own minds.