There is little doubt that Alejandro González Iñárritu’s Oscar-winning Birdman (Or The Unexpected Virtue of Ignorance) was one of last year’s most interesting films in terms of direction and cinematography, not to mention how the whole project was conceived from the beginning.

Filming Riggan Thomson’ attempt to adapt Raymond Carver’s short story “What We Talk About When We Talk About Love” into a Broadway play, while struggling with his alter ego Birdman, famously required a tour de force from cinematographer Emmanuel Lubezki, as Iñárritu wanted to recreate the look and feel of one long shot with (almost) no trace of editing.

Aside from the technicalities, Birdman is one of those movies that make me want to explore its mise-en-scène. When production and post-production look very complicated, I always want to know more, watch the behind-the-scenes, access the extra content and delve into the backstage. This film gave me great satisfaction in that respect: not only was a promotional official site launched, but an additional platform was created to provide all the material an avid viewer like me could be searching for. 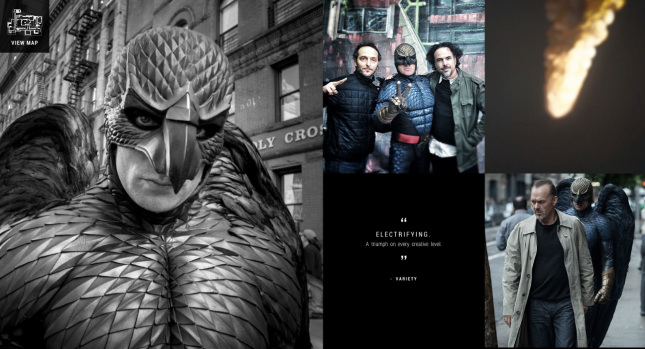 BirdmanBackstage.com gives access to a range of content that can be explored through a map that reproduces the St. James Theatre, where the action takes place in the film. Featurettes, memes and GIFs are arranged in 14 rooms, which also introduce the official fake trailer for Birdman Returns, the 1992 flick where Riggan/Michael Keaton reprised the signature role that made him a blockbuster superstar.