Making good things out of bad ones seems to be a recurring theme in the music industry, especially when it comes to rock & roll and heavy metal. As a follow up to my previous post about how penniless immigrant Eddie Van Halen rewrote the way electric guitar was played in the early 1970s, I want to direct your attention to an animated short based on the life of another legendary guitarist.

Just like Eddie, Anthony Frank “Tony” Iommi doesn’t need an introduction. Universally known as the guitar player and a founding member of Black Sabbath, the left-handed Birmingham-born musician is also considered among those who shaped the sound of heavy metal (if not the one who literally created it from scratch). This is why VH1.com’s The Complete History of Heavy Metal: Fingers Bloody Fingers, illustrated by Paul Blow and animated by Kee Koo, pays homage to his defining contribution to the genre.

You might have heard of how the legend began: after suffering an injury at work, which cost him the tips of the fingers on his right hand, Iommi took inspiration from another cult guitar player who also lost fingers, Django Reinhard, and managed to forge a replacement for his missing fingertips from plastic. What followed is part of the mythology of metal, something he designed around immortal riffs conceived on his signature Gibson SG guitars.

As Iommi explains in the short, “Of course, losing my fingertips was devastating, but in hindsight it created something. It made me invent a new sound and a different style of playing, and a different sort of music. Really, it turned out to be a good thing off a bad thing.” 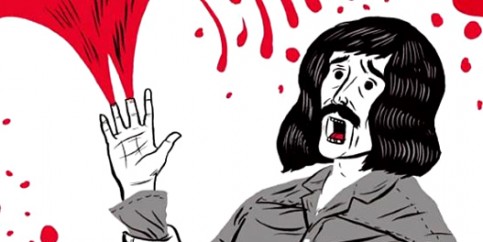 Last year on 4th July I attended the Black Sabbath gig at the British Summer Time in Hyde Park. From what I saw, over the decades the guitar legend has not lost his iconic approach to the six strings, and despite fighting a battle against cancer he was touring with his band mates to promote their latest record and working on new material. He still is the “axeman” summoning all Black Sabbath fans by simply hitting a few notes, introducing anthems the like of Iron Man, Paranoid, Black Sabbath and Supernaut with his sound born out of an industrial accident.